If you have any interesting photos of Scotter, old or new, email them to scottervillagewebsite@gmail.com

Scotter War Memorial is an obelisk of Portland Stone situated in the middle of The Green in the centre of the village. It was unveiled in 1921 to commemorate the thirteen men who died and the eighty who served in and survived the great war. Sadly eight more names had to be added for the men who lost their lives in World War II.

The Titanic was the greatest shipwreck of the 20th century, a catastrophic event that has already passed into myth and legend. On the 10th April 1912 the new liner sailed from Southhampton, England with 2,208 passengers and crew, among them was a man from Scotter. Mr Henry (Harry) Bartman Faunthorpe was born in Scotter, Lincolnshire in 1880; he worked as a commercial salesman, living in Grimsby and later in Liverpool. He boarded the Titanic at Southampton as a second class passenger together with his mistress Elizabeth Anne Wilkinson who traveled as Mrs Faunthorpe. They carried ticket number 2926 bought for £26. Mr Faunthorpe tragically died in the sinking, along with 1496 people, his and many other bodies were later recovered by the MacKay Bennett.

Mrs Wilkinson survived (probably in lifeboat 16,) and after arriving in New York Lizzie went to her cousin John M. Devine at 669 Brooklyn Street, Philadelphia where she spent several weeks recuperating from shock.

Scotter has its own potato, known as the ‘King Edward Potato’. It was bred by a gardener in Northumberland who called it ‘Fellside Hero’ and passed into the hands of a grower in Yorkshire and in turn a potato merchant in Manchester who having no use for it passed it onto John Butler of Scotter in Lincolnshire. He in turn purchased all the seed stocks available and multiplied the variety on 50 aces of land before renaming the variety King Edward on the advice of a potato merchant. It is claimed Butler wrote to Buckingham Palace seeking permission to name his potato after the monarch and that a reply was received granting royal assent. It is one of the oldest surviving varieties in Europe.

In 1890 Scotter lost both doctors, Robert Eminson Senior and Robert Eminson Junior, when they became ill and died as a result of attending patients in the pleuro-pneumonia epidemic of that year. Dr. Thomas Benjamin Franklin Eminson followed his father and older brother as our village doctor. His patients knew him as ‘Doctor Tommy’ and he served the community for over 50 years. Doctor Tommy was interested in local history and became a published author.  It seems that every Christmas he would write an article about the past year.  One from 1939 survives.

Our project was launched in order to bring together all the photographs, objects, maps, and documents that relate to the villages that make up the parish, its people and its history and “digitize” them so they can be viewed and shared by the public. Scotter, although a small village is very historically significant, with much heritage.
All these photographs and documents can be found in the Gallery on this website.
Scotter History Goes Digital (SHGD) has trained 25 Year 5 pupils at Scotter Primary School this year to become Internet Rangers. Each pupil was awarded a certificate and badge upon successful completion. Our project wanted to help people who have little or no experience of accessing the internet to become more familiar with it. So the school pupils were trained up to became the teachers for the residents of Scotter Parish. SHGD hopes by training more people within the community to use the internet safely, will enable them to look at our website as well as other community web pages.
We would like to thank all of the people who have contributed to this project by donating images,
memorabilia, and documents in order for this project to be a success. Contributors include; Kit Walker, Val Hunter, Bill Warwick, Stephanie Marris, Janet Stanham, Bev Hill, Margaret Armstrong, Sue Mumby, John Bullivent, Brian Gilhirst, Roy Wilkinson, Gillian Russel, Val Maycock, Mary Metteringham, Verna Holmes, Gillian Stillyards, Joyce Todd (the Arrand family), Marian Hill, Steve Aldan, Andrew Sheardown, Paul Wood, Sylvia Anderson, Conny Cave, Bettie Day, Katt Slack, Jacqui Pettit, Dave Capes, Ken Green, John Fardell, Charles Lidgett, Patrick Fowles, Mona Drummond, Pauline Nottingham, David Eminson, Nick Wood and Tony Smith.
Furthermore, we want to give a special thank-you to Sheila Evans, Don Meale, Malcom Fry, Mel Wright, Rachael Woods, John Bullivent, Nicola Altoft, Sue Mumby and Scotter Primary School. 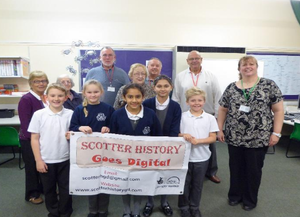 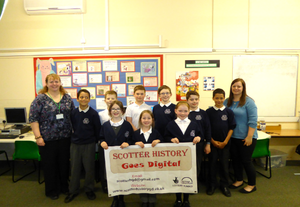 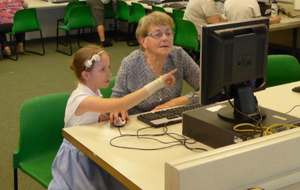 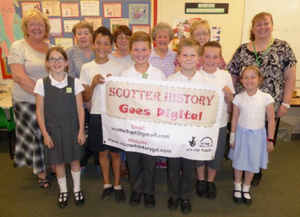 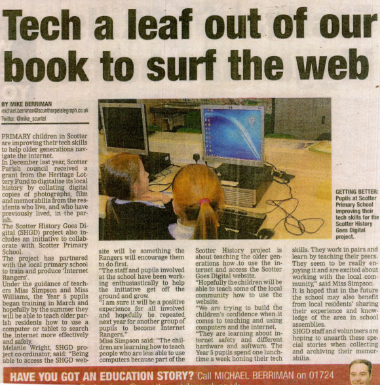 This is a walk around the village focusing on the historic buildings and the stories that accompany them. Leaflets for the trail are available in the library, surgery, The White Swan and Sun and Anchor. Gainsborough & District Heritage Centre also promote the trail and every library in West Lindsey will stock them. Donation boxes are alongside the leaflets in Scotter to go towards the upkeep of the trail.

Alternatively click on the link below to view the booklet.

The Scotter Heritage Trail was launched on Friday 22nd July in the Car Park of St Peter’s Church Scotter in celebration of the life of Christian Brown amongst family and friends.
Opened by Mike Burson-Thomas, prayers from Rev David Swannack and an appearance of the Red Arrows, Christine Brown thanked everyone who had been involved in supporting this project.

in the 2011 census and growing.
Source:
https://www.citypopulation.de/en/uk/eastmidlands/lincolnshire/E34000740__scotter/

This site uses cookies. By continuing to browse the site, you are agreeing to our use of cookies.

We may request cookies to be set on your device. We use cookies to let us know when you visit our websites, how you interact with us, to enrich your user experience, and to customize your relationship with our website.

Click on the different category headings to find out more. You can also change some of your preferences. Note that blocking some types of cookies may impact your experience on our websites and the services we are able to offer.

These cookies are strictly necessary to provide you with services available through our website and to use some of its features.

Because these cookies are strictly necessary to deliver the website, refuseing them will have impact how our site functions. You always can block or delete cookies by changing your browser settings and force blocking all cookies on this website. But this will always prompt you to accept/refuse cookies when revisiting our site.

We fully respect if you want to refuse cookies but to avoid asking you again and again kindly allow us to store a cookie for that. You are free to opt out any time or opt in for other cookies to get a better experience. If you refuse cookies we will remove all set cookies in our domain.

We provide you with a list of stored cookies on your computer in our domain so you can check what we stored. Due to security reasons we are not able to show or modify cookies from other domains. You can check these in your browser security settings.

We also use different external services like Google Webfonts, Google Maps, and external Video providers. Since these providers may collect personal data like your IP address we allow you to block them here. Please be aware that this might heavily reduce the functionality and appearance of our site. Changes will take effect once you reload the page.